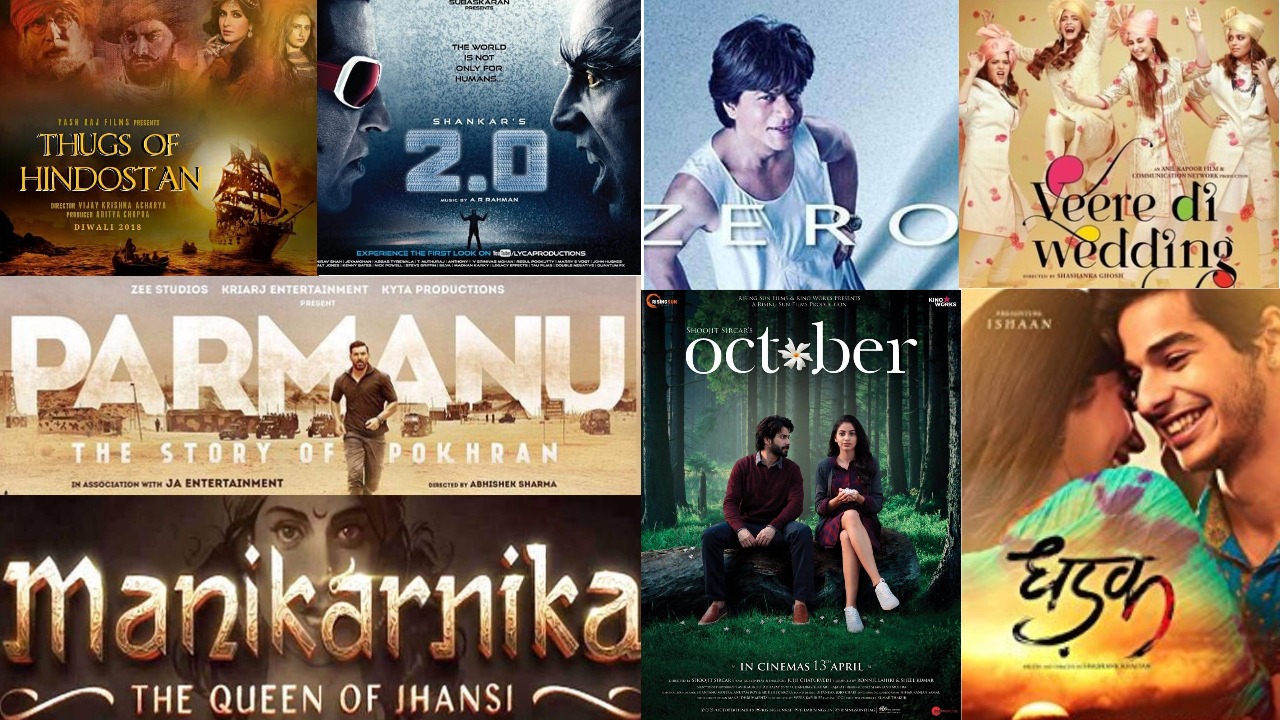 We did not see the best of Bollywood in 2017. We witnessed the grandeur of films like Baahubali: The Conclusion and saw the fall of Tubelight. But 2017 is history now. 2018 is the year we see the most awaited performances of actors like Rajnikanth, Kareena Kapoor Khan, Sonam Kapoor, Jahnvi Kapoor, Irfan Khan, Ranbir Kapoor, Alia Bhatt, Akshay Kumar, Ajay Devgan, Anushka Sharma, Aishwarya Rai Bachchan and Kangana Ranaut. The upcoming Bollywood movies in 2018 will be full of action, drama, thriller, romance and comedy. So, all the Bollywood movie lovers, gear up & get your checklist ready with the upcoming Bollywood movies in 2018, so you never miss any movie.

Parmanu: The Story of Pokhran is an upcoming Bollywood movie based on nuclear bomb test explosions conducted by Indian Army at Pokhran in 1998. Movie features John Abraham and Diana Penty in lead roles.

Inspired by Oscar-nominated movie ‘Her', October is a romantic drama film which is directed by Shoojit Sircar. The movie marks the debut of Banita Sandhu starring opposite our student of the year Varun Dhawan.

2.0 is an upcoming sci-fi action movie directed by S.Shankar. This is the first Indian movie that is directly shot in 3D. This movie is also a sequel to 2010 film Enthiran. The film stars the legendary actor Rajnikanth with Amy Jackson, Akshay Kumar and Adil Rashid.

4) Manikarnika: The Queen of Jhansi, Release Date: Second half of 2018

Kangana Ranaut's next is a biopic. Helmed by National Award-winner Krish Jagarlamudi, it traces the life of Rani Lakshmibai, one of the leading figures of the 1857 Sepoy Mutiny. The film will also mark the big-screen debut of TV actress Ankita Lokhande, we all remember her from Pavitra Rishta that aired on Zee channel.

Kareena Kapoor Khan, Swara Bhaskar, Shikha Talsania to come together for this one. And from the looks of it, this one is going to be a big, fat wedding.

Salman Khan is back with another big bang action thriller Race 3. Race 3 is the sequel to Race 2 and is the 3rd movie of the Race franchise and is definitely going to be the most exciting of them all.

The musical-comedy, directed by Atul Manjrekar, has become one of the most-talked about films. Starring Anil Kapoor, Aishwarya Rai Bachchan and Rajkummar Rao in the lead roles, it is the official remake of the Oscar-nominated Dutch 2000 film 'Everybody's Famous'.

The movie is based on the life of Hockey player Balbir Singh, who was one of the members of the team that won the first Olympic medal for India as a free nation in 1948. The upcoming sports based movie is directed by Reema Kagti and produced by Ritesh Sidhwani and Farhan Akhtar.

By the looks of it, this movie seems one crazy hit of Bollywood for this year. The cast involves Big B (Amitabh Bachchan), Aamir Khan, Katrina kaif and Fatima Sana. This action-adventure is written as well as directed by Vijay Kirshna Acharya.

Shah Rukh Khan will be seen as a dwarf! Be it a lover, Don, Teacher, Villian, Coach or a Fan of himself, Shah Rukh Khan is the best when it comes to mastering different characters and he is back with another offering 'Zero'. This movie is one of the most anticipated of the upcoming Bollywood movies of 2018.

The highly-anticipated Dharma Production will mark the debut of two Bollywood star-kids. Sridevi's elder daughter Jhanvi Kapoor stars opposite Shahid Kapoor's younger brother Ishan Khatter in the official remake of the Marathi superhit 'Sairat' which is being directed by Shashank Khaitan.

Beat The Heat This Summer While Looking Sharp

Do's And Don'ts For A Tinder Date