All About Social Phobia

Unlike others her age, 18-year-old Deepti Varma (name changed) dreads going out, rarely speaks to guests who drop by for a visit and doesn't have friends. She believes she is not as pretty or hep as her peers and is being constantly judged by them. Even a visit to a mall can turn traumatic for Deepti, because it involves shopping in the presence of others.

The disorder:
Deepti suffers from social phobia, an anxiety disorder in which a person has an intense, irrational fear of interaction, of being judged, and of facing potential embarrassment. Social phobia is marked by the inability of a person to conduct her in social situations. Clinical psychologist Varkha Chulani says, "The socially phobic either get quiet and tongue-tied, or they get so anxious that they start talking rubbish. Such people don't seek out any interaction for fear that they will make a fool of themselves." 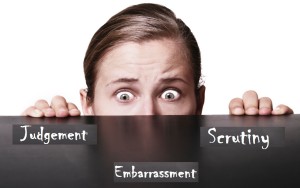 The way out:
The disorder manifests in two ways—an inferiority complex, or the more serious one dealing with a personality disorder. Psychotherapy is commonly used to help patients overcome social phobia. "Psychotherapy helps the person gain a fresh perspective on attitudes that she has developed. The treatment helps them feel empowered and to reconstruct the attitudes that they have learnt while growing up," says Dr Chulani. This includes social-skills training, which helps the person get over feelings of inadequacy. Cognitive behavioural therapy is also commonly used. It involves exposing the patient to certain social situations in which she learns to cope with anxiety and to develop the confidence to tackle such situations. In serious cases, medication may be required. This helps the person overcome his anti-social trait. Doctors warn that social phobia is becoming increasingly common. "Ensure that you develop healthy interactions with family and friends, and have a positive outlook towards life," Dr Chulani advises. "This can go a long way in keeping such anxiety disorders at bay."

The signs:
Symptoms include fear of the spotlight, of meeting strangers and authority figures, and having extremely low self-esteem. This includes the belief that others see you as weak or stupid. People with social phobia are known to experience sudden panic attacks, muscular tension, tremulous voice, unsteady hands and feet, cold or sweaty palms, intense sweating and difficulty while breathing. It is tough to pinpoint the exact cause. In many cases, social phobia may be genetic.
In recent years, the growing dependence on social networking websites, mobile phones and online chatting is only adding to the problem. Therefore, give yourself exposure and just not stay enclosed in four walls.

Dr Rima Mukherji, a Kolkata-based clinical psychologist, blames new methods of socialization for the increase in the number of cases.
"Whether it is children or grown-ups, on the whole, group activities are decreasing. The nuclear
family set-up, coupled with over-protective parents don't give children a chance to interact with other people. People are becoming socially awkward, because they are not able to pick up body language cues, read expressions and, basically, understand other people."

Did you know? Michael Jackson, Barbra Streisand, Kim Basinger and Marilyn Monroe are all said to have suffered from social phobia.

How To Avoid Dozing Off In The Office

Too Much Of Fatigue Ruining Your Lifestyle?