Everybody is talking about Bollywood superstar Salman Khan's sister Arpita Khan's wedding that took place on November 18. The hottest stars of tinsel town attended the most high-profile wedding of the year and the grapevine has since been buzzing of the grand affair. Apart from the guest list, another thing that's been talk of the town is the wedding trousseau of the bride and groom designed by Abu Jani and Sandeep Khosla. So in this special feature, we decided to decode the pretty bride's wedding looks. Take a look; maybe you'll be inspired to don something similar at your own wedding! 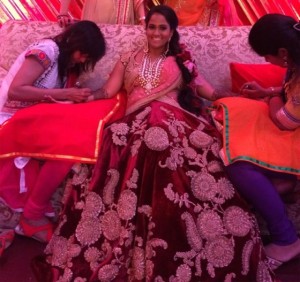 The wedding started with a lavish haldi-mehndi ceremony in which the blushing bride wore a maroon embellished Sabyasachi number. Arpita Khan sat like a princess while her hands were being adorned with mehndi. Her hair was elegantly tied up in a long side braid and she wore kundan-jewellery to finish her mehndi look. 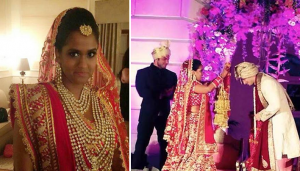 During the pheras, Arpita looked stunning in a bright red Abu Jani-Sandeep Khosla lehnga-choli. The warm colour looked lovely on her, and gold-kundan jewellery matched well with the ensemble. Her makeup was kept subtle for a bride, but she looked every bit graceful. 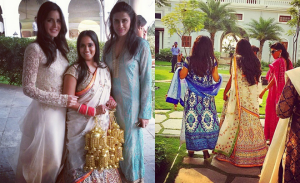 Arpita posed happily with Katina Kaif during her kaleera ritual[/caption]

The most interesting thing happened during the kaleera ritual – Arpita dropped a kaleera on her brother Salman's ex-girlfriend Katrina Kaif, who recently moved into an apartment with beau Ranbir Kapoor. Arpita looked happy posing for the camera in an off-white and gold lehnga-choli. 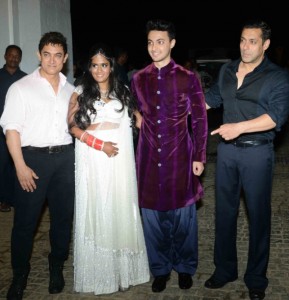 Arpita and Aayush flanked by Aamir and Salman[/caption]

For the after-party, Arpita changed into a lighter ensemble, again by Abu Jani-Sandeep Khosla. Though the outfit was beautiful, how we wish it wasn't eye-catchingly high waist, and also that the blouse could have a better shape to suit the lovely bride. Anyway, her ensemble was pretty with minimal jewellery and glossy makeup. 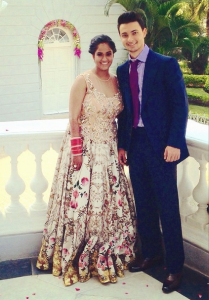 The newlyweds during the farewell brunch[/caption]

This was followed by a lavish farewell brunch at Hyderabad's Falaknuma Palace. Arpita Khan Sharma wore an elegant embroidered gown by designers Falguni & Shane Peacock and finished off her look accessorized with solitaires and her wedding chooras. We absolutely loved the lovely beige coloured embroidery that is complementing Arpita's complexion. 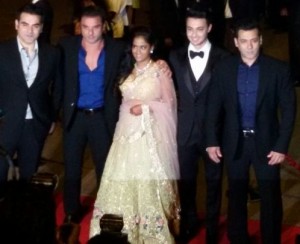 Finally, on the evening of her reception, Arpita wore an exquisite beige-coloured lehenga choli, replete with attractive jewellery and a neat  hair do. The texture and design of the lehenga added to its elegance.

Overall, despite the news-making venues and high profile guest-list, the first lady of the event, Arpita, chose to keep her makeup and hairdo simple. She let her amazing outfits and simple yet elegant jewellery do all the talking.