Making conversation is an important part of life. It is an important means of communication with the world and the people around us. As important as it is, sometimes we end up using words or phrases that might actually hurt someone, be it our intention or not. Here are some words that hurt others that you should avoid at all costs.

Also read: Senti Much? Advantages And Disadvantages Of Being Oversensitive

Once upon a time, the term gay solely meant happiness and joy; however it has a completely different connotation now. Telling someone, especially a man, that they are acting gay when they get a little emotional is wrong. It is offense to the homosexual community as their identity is being used to describe supposedly undesirable behavior.

Words like "You hit like a girl", "You talk like a girl" etc are very offensive. Usually, statements like these are directed towards guys when they behave in a manner that is not approved by society. Such statements hurt the individual they are directed at, plus offend the entire female population as well.

Let's face it, no one likes being left out. Such statements make people feel that you don't think they are smart enough to understand the topic of discussion or merely the fact that you aren't interested in sharing things with them. Either way, the statement is hurtful.

This kind of statement is usually used when someone is trying to help you out or guide you, when you actually don't want their help. But, the thing to remember is, that a friend caring for you and giving you advice doesn't mean that they know better than you, it just means that they don't want to see you hurt. So respect them! 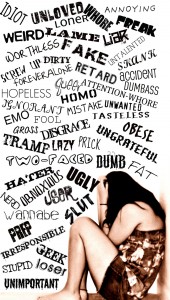 More often than not, this statement is a lie and is always hurtful no matter what the context. You might think you are being cool by giving zero f**ks by not caring about other people or things, but honestly you could be hurting someone by not showing interest in their problems or achievements.

Don't say this to people when they are talking about anything under the sun. If you want them to stop talking, find a polite way to let them know the same. But shunning and shutting them up saying "paka mat" is not cool at all; show them some respect.

Get lost or its counterpart "F**k off" is better left unused in all situations. No matter how irritating the individual is, or no matter how angry you are, this is no way to talk. Be civilized and let them know you don't want to talk to them at the moment and would rather be alone for now.

No! Just no! Never use anyone's physical appearance when referring to them in conversation or calling them words. Don't use terms like moti/mota, kaali/kaala, lukkha/lukkhi that describe their physical appearance. Some people might take that as a joke, but majority won't and will get offended. So save yourself and avoid these terms altogether.

When you are talking about a particular subject or explaining something to someone, and they don't quite understand you, it doesn't mean that they aredimwitted.They probably haven't heard you right, or you might have not explained properly in to begin with. Either way, repeating yourself will cost you nothing, but calling them duffer might just offend them.

Make sure you steer clear of these words and spare someone's feeling today!

Love To Gossip? Here are 4 Side Effects Of Gossiping

Factors To Seriously Consider While Selecting A Baby Name