Best Bollywood Proposals of All Time! 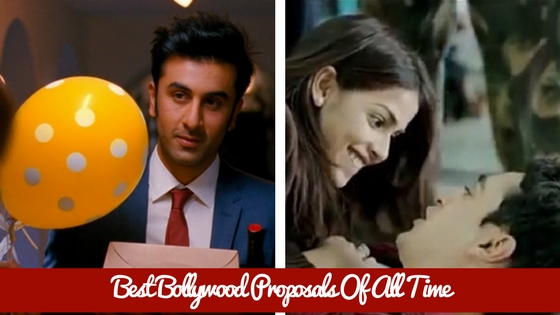 Confessions have always been difficult. Not only for us, but also for the Bollywood characters who have been struggling with their feelings and have finally expressed their emotions with dramatic gestures. Bollywood has created very high and impractical standard of romance. Be it the songs or locations, the dialogues or the proposals, most of us are romantics and cry during movies. If you are one of those people, take a look at the following proposals that will make you go AWWWWWW!

Aakash who is a cynic when it comes to love, ends up falling for Shalini and proposes to her at her engagement in front of her fiancé.

Ambitious and strong headed Aaliya realizes her feelings for Abhay who has travelled oceans and always been there for her, when she flies from Australia to Delhi when she finds out he's getting married. Aaliya goes on her knees and asks "Gulati" to marry her!

This movie always makes me cry, because I want Aman and Naina to end up together but I also feel bad for Rohit who loves Naina and asks her to marry him in spite of knowing that she loves Aman. Rohit (Saif Ali Khan) acts proposes by the book with red roses, music and spotlight!

Every girl wants a partner who tries to impress her everyday, who makes her smile everyday, who makes her his entire world. Tani who was married to the very simple hard working man Surinder fell for Raj, who was expressive and affectionate! He confesses his feelings to her by lighting up the entire town to trace an ‘I Love You'!

The movie that gave us the ultimate airport romance goals! Jai does everything that is contradictorily clichéd. He breaks out of prison, rides a horse and breaks into the airport while being chased by security and screams out Aditi's favorite song ‘Mera Tujhse Hai Pehle Ka Naata Koi'.

The movie that broke stereotypes when it comes to romantic films gave the young generation a realistic story of two people who face practical problems like ‘their priorities'. Bunny who is passionate about travel falls in love with Naina and reevaluates his priorities. His proposal is not grand but completely real and possible.

Aisha and Abhay were always going to end up together! Abhay finally decides to express his feelings for his lady love screaming from under her balcony while she's leaning on the balcony making us nostalgic.

6000 Candles+Perfect location, but still Deepika refused to marry him. She does end up going back to him later because how can you say no to a guy who lit so many candles for you!