Detach Yourself Emotionally From The Clutter

There are many people who find it difficult to part ways with their possessions. Some don't want to chuck things away for emotional reasons; others fear that old items in the house could be of use to them sometime later in the future, if not today. But, do you know that accumulating these old junks at home spreads a lot of negative energy? It also causes a lot of stress, and in extreme cases, depression. What's more, the house looks like a storehouse where useless items are dumped, thereby robbing it of its beauty and usable area.

So, muster the courage (I know it sounded extreme, but yes, I meant it for some people who are very emotional or plain lazy) and start de-cluttering the rooms one-by-one.

Don't cling on to something for stupid reasons

Never be a cat on the wall; deal with the cleaning by answering one question honestly – is it of use to me? If your answer is yes, retain it; else, toss it out. Remove all the clutter that was never used in the past six months. There are chances for you to be emotionally attached to some things; but currently if it is of no use to you, don't give it a second thought. The first mobile phone you possessed, the first phone you purchased with your own earning, the bottle of the first expensive perfume you bought – all are lying somewhere in your house; you don't want to chuck it away simply because it was your "first" or because you spent a bomb buying it. Well, not a good enough reason. Are you planning to keep it till you retire? Do you want to show it off to your great grandchildren? What is the point in keeping an item that you do not use? You will have to detach from it sometime or the other. So, click a nice picture of it for memory, and throw the item off. At any cost, it is important to de-clutter.

In a world where technology keeps evolving, it is mandatory to throw away unnecessary gadgets stored at home. There are people who never part ways with some possessions like their age-old walkmans and radios dumped in the racks of their store room. Also, there are many who refuse to dispose drained out batteries and bulbs that are of no use. Half the mess at home can be cleared if one sits to de-clutter the dumped gadgets.

Buy a couple of multi-divider boxes that will help you store the necessary gadgets. Label each partition according to the kind of gadgets you own like memory cards, plugs, ink, batteries, docks, tapes, disks, chargers, microphones, USB cables, network cables and so on. Discard every item that you will not use; be it gifts or memories. Roll the cables and tie them to make sure the cables don't tangle and place them in the divisions allotted.

Often, when we are on a tour, we buy artefacts for our home. Similarly, several people are gifted with artefacts on special occasions. Thus, these works of arts tend to hold a special place in our memory. This does not mean we have to preserve them for years on end despite them being damaged or unused since ages. If you're preserving it for memory sakes, click a series of nice pictures and save them in your hard drive; and bid a final adieu to those items. What is the point of owning an item when you don't use it?

Throw away unwanted utensils and garb

Many women make the mistake of using utensils that are broken for the emotional reason that it was gifted to them on their wedding. If the handle is broken beyond repair, and you've been avoiding using the vessel for all the trouble it spells out, it is advisable to throw it away. The blades of your vegetable chopper might have rusted six months before, but you forgot to dispose it; well, now can be the right time for it. 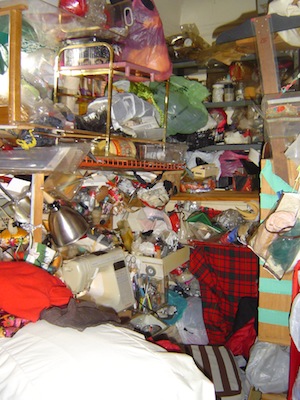 The same way, there might be many bed linen that have stains or are torn, but you do not wish to part ways with it. Worry not, giving the problem a second thought makes the situation worse; just close your eyes and throw them off. This is applicable to clothes as well. If you have outgrown an outfit or dislike the dress, it is advisable to seal it all in a box and donate to orphanages.

Yes, de-cluttering is a tedious job, but will you get peace of mind living in a house filled with unwanted stuff? Well, emotionally they might be of some importance to you, but, technically they are a waste if you are not using them anymore. So, straighten up and clean the clutter for your own good.

Quick Ways To Declutter Your Closet

Why We Should Start ‘Suspended Coffees' In India