Manicure Trends That You Have To Try For Sure in 2019!
Fashion And Trends

Holiday season is in full swing and I'm sure most of you are already party hopping! But when you have to attend so many parties back-to-back, You tend to worry about looking the same in all of them. That won't do! Why stick to your everyday makeup routine for holiday parties? Once you ace your base, achieving beautiful festive makeup looks is just a few steps away! Here are some of the most requested makeup looks that you could try this season, our team took the trouble of finding them on the oh-so-blessed YouTube.

Also read: How to enhance your best features using makeup 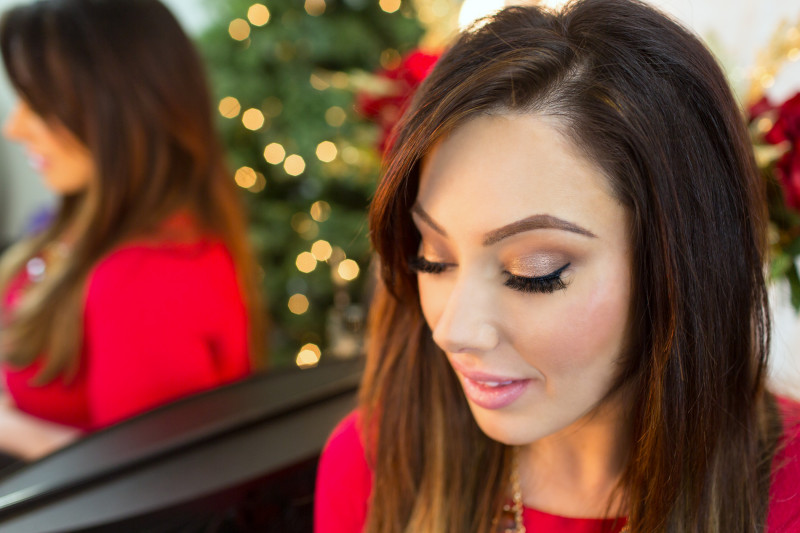 This makeup looks amazing on a red dress or a flowy gown; try it![/caption]

Since Christmas spirit takes a long while to fade off, many people would want to wear elaborate red dresses or bright flowy gowns to a party. But the biggest concern while wearing such outfits, is "What makeup should I wear?" Of course you don't want to end up looking like Mrs. Claus or a Cinderella wannabe! So try this look instead!

Step 1: Step one is always getting the base right. This tutorial will help you out: Nail Your Base Makeup With This Tutorial To Make It Last

Important tip: Now that you've nailed your base makeup, it's time to proceed with the finer nuances. Since you're going to wear a red dress, bear in mind that you need to stay away from bright colours. Choose a palette in nude or neutral shades. Always do your eye makeup before your cheeks or lips as you can tone them down or lift them up later. But if your eye makeup has gone wrong, it's Dooms Day. 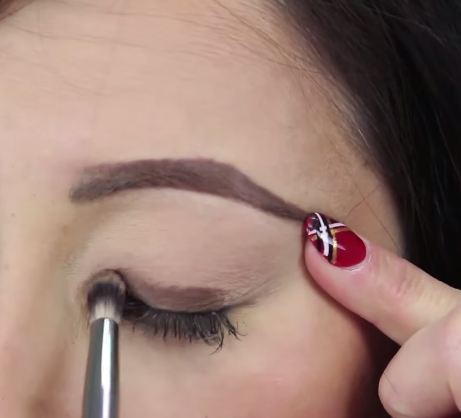 Step 2: So let's begin with the eyes! Apply some concealer on your eyelid so that the eye shadow stays put. This look is going to be neutral so a brown smokey eye is perfect for it! Start with a dark brown eye shadow and using an eye shadow brush, apply it close to your lash line first and then spread the rest of it on your entire eyelid just till the crease. 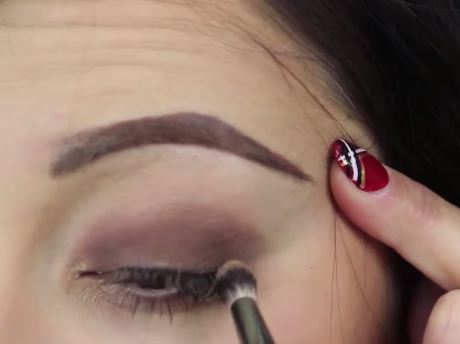 Step 3: You may notice some harsh edges on your eyelid after step two but don't worry about them as you'll be smudging them off in this step. Pick a lighter brown eye shadow on your brush and gently apply it in your crease smudging out the harsh edges as you go. Notice how your eye immediately looks softened?

Blend your smokey eye well and line it well[/caption]

Step 4: This would be the last step that you need to do for a smokey eye (apart from the liner and mascara of course!). Before you begin adding the finishing touches to your smokey eye, use a fluffy blending brush and blend your eye shadows well. Then finally, pick up a nude shade that is very close to your skin tone and work your way into the crease and above it. Buff out any harsh lines and soften your smokey eye all over. 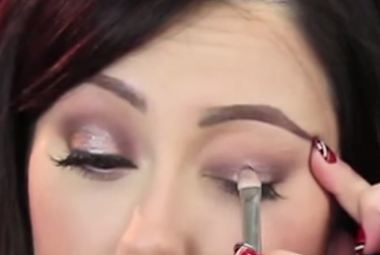 Step 4: Now for the fun element! Just because it's festive season, a little bit of glitter won't hurt anyone right? To amp-up the glam quotient of this makeup look, apply some brown glitter only on the centre of your eye lids and you're done! Finish your eye makeup with a dash of mascara and your favourite eye liner. Here's another great tutorial for eyeliner. 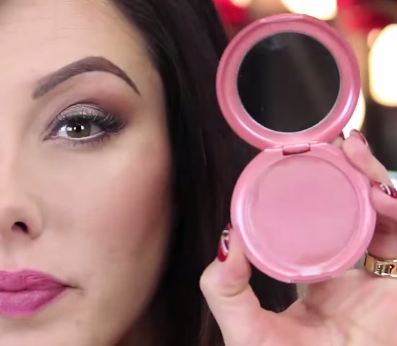 A smokey eye goes well with natural cheeks and lips[/caption]

Step 5: Eyes are done! Now's the time for the rest of your face; and you don't really need to do much. The same rule applies to the cheeks and lips as well. Neutral is better that pigments. So opt for your natural blush that you like to wear every day. Swipe on your favourite nude lipstick that compliments your skin well. Voila!

Makeup for Indian dresses and/or sari:

Not all of us have the bomb figure to carry a gown or a mini dress; but we Indians sure as hell have the killer looks to go with our (mostly) pear-shaped figure. The Indian pear-shaped figure looks beautiful in a sari or an Anarkali dress; but wearing either without makeup is a strict no-no. Here's a classic look that goes with any Indian out if you know how to play with colours.

Step 1: Indians have a warm skin tone that's such a blessing because we can easily wear most of the colours on our faces and look like divas every single day. Thank God for that olive skin! Repeat the first step mentioned above. 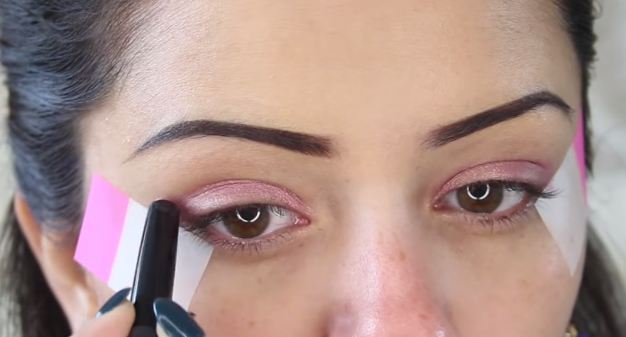 Step 2: Moving on to the eyes, apply concealer around your eyes and use a base eye shadow in the lightest pigmented colour that you have. A very light champagne pink colour has been used in this tutorial, but you can use whatever colour you have; just make sure you stick to the same family. Simply apply it all over your lid, except for the crease and above.

Highlight your brow bone and apply the second eye shadow[/caption]

Step 3: Highlight your brow bone to lift up your eyes. Then apply a second eye shadow in a brick red-meets-brown shade over the first one, sticking close to the inner corner of your eye. Then go over the same with another bright shade (purple has been used here) to balance it out with the first colour that you applied.

Step 4: Fill in the rest of the eyelid (center and outer corner) with a mocha brown eye shadow. And then use a softer brown eye shadow in the crease as a transition colour. Finish with eye liner and loads and loads of mascara! 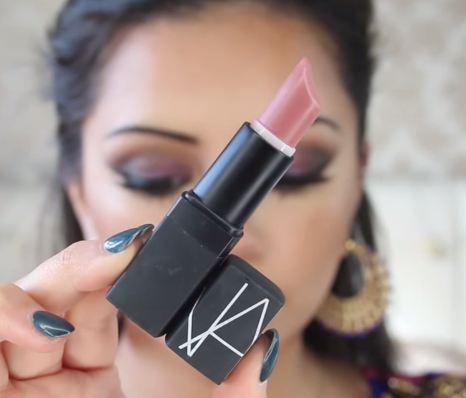 Since the eyes are so bright, lips should be neutral[/caption]

Step 5: Since the eyes are so colourful, the lips will again be neutral. Choose a lipstick that matches your natural lip colour and apply a generous amount, before blotting it with tissue so that it sets. You can apply a bronze to your cheeks and under the jaw line, but that's optional. So there you are the most beautiful Indian makeup look you have ever seen!

Whether it's a New Year's prom night or a grand party that you're headed to, try these looks that would make you look like a million bucks in no time!

(Note: the pictures do not belong to The Brunette Diaries)

Nail Your Base Makeup With This Tutorial To Make It Last

How To Spot And Deal With Jealous People