Dakota Johnson, for the premiere of her upcoming movie, ‘Suspiria’, wore Gucci, Cartier and hairy armpits. Yes, the actress didn’t bother to shave her armpits before stepping on the red carpet for the premiere on Oct 16.

The Fifty Shades Freed actress raised her arms for the world to bear witness to her unshaven underarms. We love that she’s taking a bold stand against the expectation that women need to shave for formal events — or any event! Dakota brought the spotlight on her even more with some glittery choices in evening wear: a silver Gucci gown, paired with Cartier jewels. 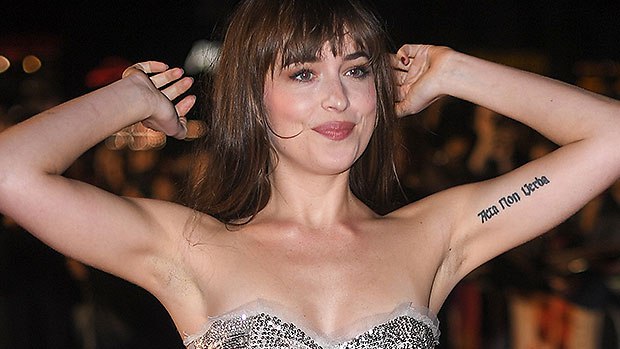 But a little armpit stubble wasn’t the most shocking thing that happened to Dakota this month. Dakota’s birthday party on Oct. 7 was mistaken for a baby shower thanks to some cryptic pink and blue balloons. Pregnancy rumours roared forward the next day, which even the actress in question poked fun at! “The only thing I’m pregnant with is a lot of really good ideas,” Dakota joked to Ellen DeGeneres during an interview that aired on Oct. 11. “But not any babies.”

Since she and her boyfriend Chris Martin, 41, aren’t expecting a child, we wished we at least got a closer peek of Dakota’s matching tattoo with the Cold Play lead singer! Instead, the actress flashed her Latin tattoo, “Acta Non Verba.” That translates to “Deeds Not Words” — okay, that’s pretty cool! 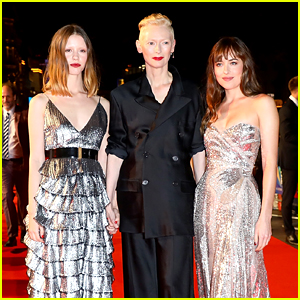 Dakota also posed for a photo with Mia and her other co-star, Tilda Swinton. We’re excited to see all the aforementioned ladies in Suspiria, which was filmed at a deserted hotel in the Italian Alps! Dakota admitted it wasn’t an “easy, breezy shoot” to W magazine. In addition to her number of dance scenes, the movie set wasn’t very forgiving, “It’s a crazy, crazy film, totally unsettling, and it’s amazing how uncomfortable it makes you feel,” she shared with the magazine. “If I hadn’t seen a lot of horror films, I’d think it’s a total mindf**k."

20 Greatest Horror Movies To Kick In The Halloween Feels!