Writing a story that not only stimulates the reader's mind, soul, emotions and intellect, but also stays with them long after the last page's last line was read, isn't an easy task. But, author Vinita Bakshi has achieved exactly that with her book 31 Miles.

The story revolves around a young housewife named Mansa who enjoys a blissful life with her caring husband and two loving daughters. When the family moves to a new city, she decides to step out of the four walls of her house and seek a career. Soon enough, the talented Mansa finds a job and gets busy juggling her professional and domestic lives. One fine day, she bumps into a man online and falls in love. Overall, 31 Miles takes us through Mansa's journey of self-discovery and self-liberation.

In an exclusive interview with The Brunette Diaries, Vinita spoke about her book, her thoughts, and a lot more. 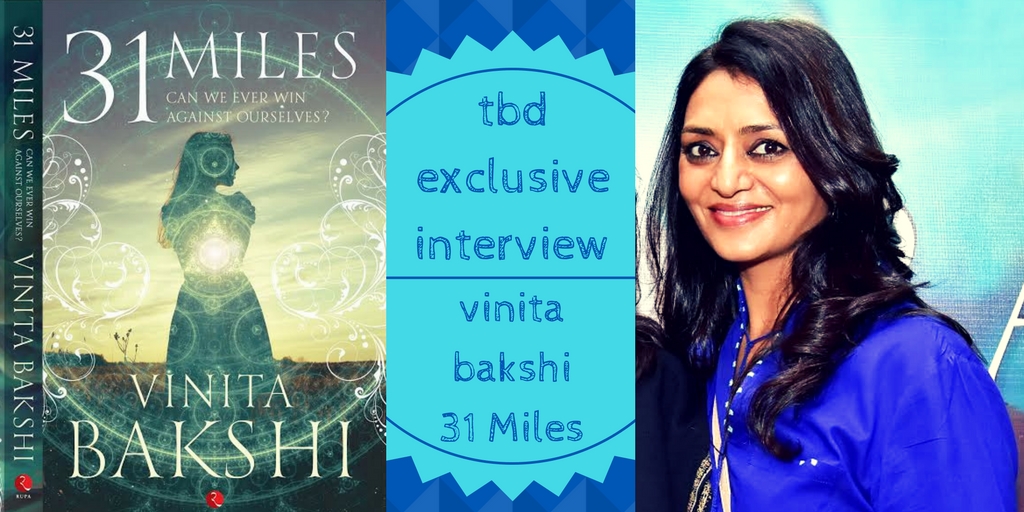 How long did you take to complete 31 Miles?
It took me around 3 years to complete the book.

What's the TG of your book?
The target audience is anyone above 16 years of age. They will understand and relate to the book better.

Your favourite book?
I have so many of them. I love Roald Dahl, he is extremely versatile, unpredictable and intriguing. I love reading Amitav Ghosh's books not only because he has been my professor in college but also because of real life amazing characters that he is only capable of. I really enjoy reading books from William Darlymple, Elif Shafak and many others. There are so many books close to my heart that it's impossible for me to choose just one.

Also Read: Amitabh Bachchan's House, Jalsa Is Worthy Of Being A Legend's Palace

Any book that you've forever wanted to read but haven't yet?

There is this book, Autobiography of a Yogi by Paramhansa Yogananda. This is one book which I've tried reading quite a few times, but for some odd reason I haven't been able to complete the book even though it's so riveting. You may find it surprising but I've been trying to read this book for almost 10 years now! It has been with me in my car. Once I read as much as 50% of the book, after that 70% or even 80%, maybe only when the right time comes.

Do you read e-books?
No, nothing against them as such but somehow I don't. I personally love the texture of paper, the smell of pages and the sound of turning them. Oh yes, I'm too much in love with the paperback.

What's the longest you've binge-read?
Sydney Sheldon while I was in senior school, inside the quilt with a battery at night when I was forbidden.

Your take on online dating.
I feel that it depends on what the person is looking for. In today's world people are extremely hard pressed for time and the fact that our dependence on digital technology is growing, online dating is getting something as casual as two people meeting in a cafe or a marketplace because I think that is where we're all headed, that is what the future looks like. So nothing really against it, I feel it's cool. I wouldn't have written about it if I was against it in the first place.

3 things that are important in a romantic relationship.
3 Cs. First would be commitment, which is most important. It may sound a bit clichéd, but without commitment you don't go anywhere.
Second, there has to be a connect, deeper than what one experiences with other people around. A unique connect which one hasn't felt with friends, parents or siblings or for that matter with anyone before. There has to be that special connect with that someone special.
Thirdly, I feel care is something that is essential for any relationship.

3 legit white lies usually said to sustain a relationship.
1. I love you, can't live without you- quotes

3. Gifts on no occasion

Also Read: Divya Dutta And Her Experience Of Turning Into A Writer

One gets to spend more time with family but unless it is happy and quality time it is of no account.

To begin with, I would prefer to not have any sort of differentiation between a housewife and a working woman. We often fail to notice that a housewife also does a lot of work on a daily basis which isn't recognized much. They probably aren't considered equal enough as an earning partner, but there's a lot of unpaid labour involved.
A lot of women's organizations have been demanding that the government should include their contribution to the economy via household work in GDP.  Every profession has its own set of pros and cons. Hence, it is difficult to dichotomize between these categories.

- Exposure
- Opportunity
- Participation in economic development of the country
My answer remains the same as for the previous question, you cannot just compartmentalize between these aspects.

3 words that describe your writings.

I would consider those words to be:

- Appealing
- Honest
- It represents modern urban women not only in South Asia but across the globe.

3 words that describe 31 Miles.
- I think 31 Miles is a very unconventional book. It explores the institution of marriage to a great extent with an open minded and fresh perspective.

A genre you will never explore as a writer.

I have never read a book from the sports genre. But I would definitely like to read.

Your next book's theme

There are two books that I'm currently working on.

First one is the sequel of 31 Miles which I'm working on as of now. Then I have an upcoming project in Hindi called Bindu Ka Dayra. I am talking to a few publishers. It's a metaphor which I've used to highlight Bindu's plight and helplessness. The earth was created out of a tiny dot, Big Bang created this limitless universe. Hence, the word ‘bindu'; in that sense it is infinity. Thus the female protagonist in my book is named Bindu.

Bad Sleeping Positions That Can Harm You!