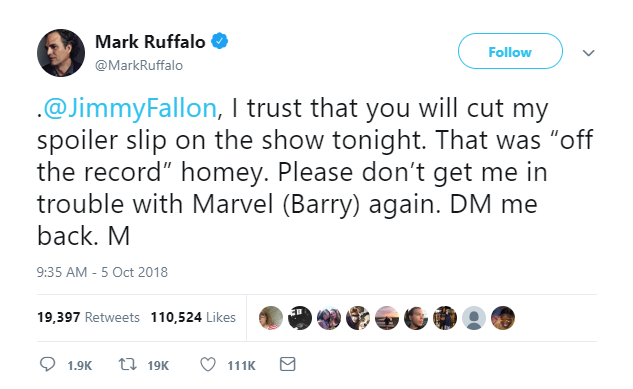 We all know Mark and Tom Holland's long history of accidentally spoiling so many Marvel movies, but Mark one-upped Tom by literally spoiling 'Thor: Ragnarok' by being on Instagram Live during its premiere.

But, this time, clearly as a joke, Mark Ruffalo revealed the title of the next Avengers movie on The Tonight Show Starring Jimmy Fallon. Later, he tweeted to Jimmy to cut out the spoiler or else he’ll get in trouble with the studio. Now, those who did not know what was going on totally lost their shit! 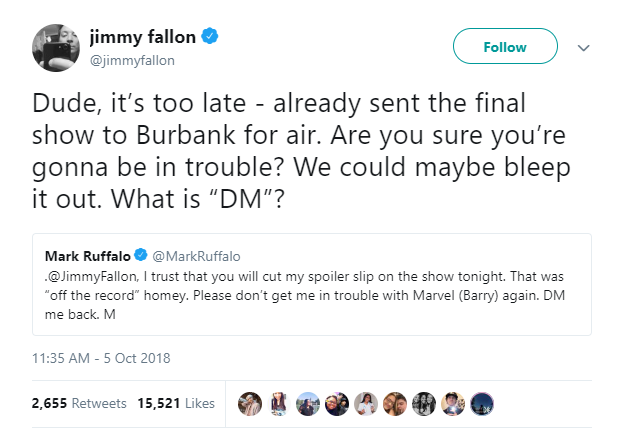 One said: “@Russo_Brothers You can’t fire Mark, he’s played an amazing Hulk, one of the best ever ! @jimmyfallon hid the title information from Mark’s interview! You are all risking a boicot at the theaters if you don’t reconsider . Come on guys, nothing was exposed. Stop it!”

Don’t worry, that particular stan was very relieved when someone pointed out the whole thing was a joke. The hugely anticipated Avengers 4 is directed by Anthony and Joe Russo, who are keeping the new title a closely guarded secret. The titles of Marvel universe films used to be announced years in advance. But fans have been left in the dark this time around and still don't know the name of the fourth Avengers film, due to be released in April 2019.

In September, the Russo brothers added to the hype by posting a photo on Instagram with the caption "Look hard...". It prompted fans to look for clues for the new name in the photo. Given the huge anticipation, it's unlikely that Mark Ruffalo didn't know exactly what he was doing. But unlike most of the other cast members, he does have form in unwittingly revealing spoilers.

The Russo Brothers promptly tweeted the 50-year-old actor: "You're fired." 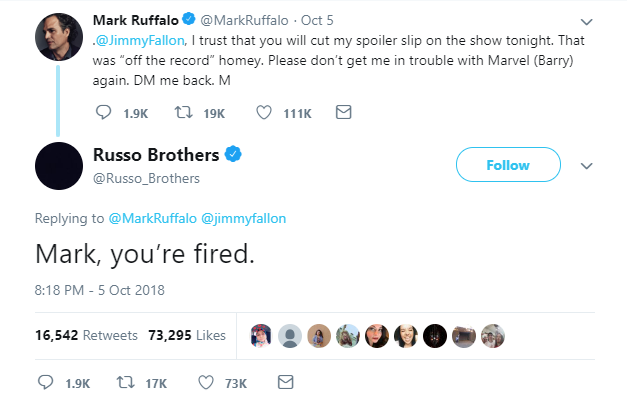 And how can we forget the time, when during an interview, Mark said this about 'Avengers: Infinity War' - “Wait till you see the next one, everybody dies.” Don Cheadle's face said it all.