Social media may be the latest and greatest way to interact with people all over the globe, but like all useful things, it has its side effects too! Every time you get on the internet and log on to one of the social media networking websites, have you considered, that the info you might be sharing may be misused? Have you thought about how certain information you may be giving away with the idea of getting people to know you, may be just too much?

(Also read - Social media – how much is too much?) 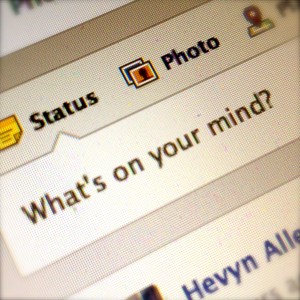 Be careful of the posts you put up[/caption]

Social media has a number of downsides, in fact. The problem is, very few of them are underlined. Post a status, check out the comments on your post; post a picture, find out how many likes; put up your number, get calls from people who need to call you... isn't it getting a bit too far? You would never give your number to a stranger, would you? However, on social media there is a sort of softening of conscience that leads us to pour out valuable information about our personal lives that can sometimes be misused! "Oh, why would my friend misuse my information or images", you may ask. Well, don't we often end up adding friends or accepting requests from people we may never even know, just because we have mutual friends? But are those "friends" really safe? What if they, one day, decide to misuse your pic, contact details or location?

If you've hit the panic button already, relax; as the Brunette brings to you five things you should not share on social media networking websites.

It's never a great idea to post about a gathering that you may be having. Not everyone on your friend list may be invited which may make some close friends feel bad. If you're trying to cast a wide net by throwing out an idea for a social outing, just remember that anyone who has access to your profile sees it. So be careful as someone could misuse your location information while you may be partying or chilling with friends.

Usually, people jump to their social networking profiles and update their job profiles just to let everyone know of their promotion. This could be valuable news for your company's competitor therefore news like this should be kept private. Company location information could be used probably used by a stalker or an unwanted personal admirer and lead to trouble at work!

I've seen people posting pictures of their kids or husbands with captions like, ‘alone at home with kids', ‘husband out of town'. These kinds of captions can be valuable information for someone who probably doesn't have good intentions.

Yup, address! Why would people do this? Most people post their mailing address on social media sites... not advisable! This could soooo easily be misused by anyone. You don't need to ‘check in' at home now, do you?

(Also read - How safe is it to upload photos on social networking sites?)

Guys, especially guys, and probably a few girls too, put their numbers up on social media sites thinking that they could get lucky! Haha... they could get into trouble, if they are ‘lucky' enough. 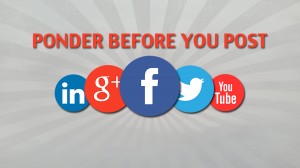 Yesss! Ponder before you post![/caption]

So if you are one of those social media junkies that trust Facebook, Twitter, Google + or so on with your valuable information, remember, your info is on public domain, and not everyone has good intentions like you may have! Just because you're a vegetarian, doesn't mean the lion won't attack you.

Credit card – a boon or a bane?