Kevin Hart Gave Up His Hosting Gig For The 2019 Oscars Over Homophobic Controversy!

Back in 2009 and 2010, Kevin Hart had tweeted certain things against the LGBTQ community, which have resurfaced a lot of time by now. But, when it was announced that Kevin will host Oscars 2019, his old tweets stood as a problem.

Hence, Kevin Hart gave up his hosting gig for the 2019 Oscars, two hours after sharing he wouldn’t oblige the Academy’s request to apologize for his anti-gay tweets. See his announcement and apology, here.

“I have made the choice to step down from hosting this year’s Oscar’s….this is because I do not want to be a distraction on a night that should be celebrated by so many amazingly talented artists,” the Night School star revealed. And he finally apologized for his offensive tweets, as he wrote, “I sincerely apologize to the LGBTQ community for my insensitive words from my past.” The apology continued into another tweet!

“I’m sorry that I hurt people. I am evolving and want to continue to do so,” the comedian continued. “My goal is to bring people together not tear us apart. Much love & appreciation to the Academy. I hope we can meet again.” News just broke that Kevin would host the forthcoming award show on Dec. 4. His apologetic words come as a surprise, as the comedian was pretty adamant about not saying sorry just two hours ago.

“I just got a call from the Academy and that call basically said, ‘Kevin, apologize for your tweets of old or we’re going to have to move on and find another host.’ I’m talking about the tweets from 2009 and 2010,” he said in an Instagram video, posted on Dec. 6. “I chose to pass on the apology. The reason why I passed is because I’ve addressed this several times. This is not the first time this has come up. I’ve addressed it. I’ve spoken on it. I’ve said where the rights and wrongs were. I’ve said who I am now versus who I was then. I’ve done it. I’m not going to continue to go back and tap into the days of old when I’ve moved on and I’m in a completely different place in my life.” The video followed another from earlier today, in which he insisted that he “loves everybody” 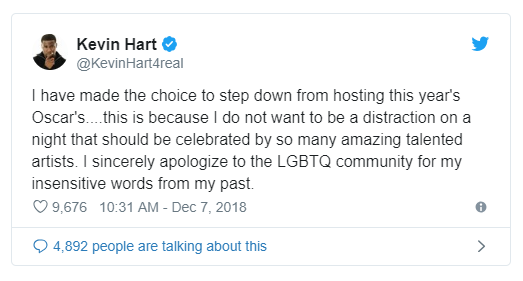 As for the tweets under fire, Kevin posted in 2011, “Yo if my son comes home & try’s 2 play with my daughters doll house I’m going 2 break it over his head & say n my voice ‘stop that’s gay.” He has also used homophobic slurs in tweets dating 2011 or earlier. But not only were his social media posts called into question, as he once said in a 2010 standup routine, “One of my biggest fears is my son growing up and being gay. That’s a fear. Keep in mind, I’m not homophobic. I have nothing against gay people. Be happy. Do what you want to do. But me being a heterosexual male, if I can prevent my son from being gay, I will.” He later addressed the thoughtless quip in a 2015 interview, telling Rolling Stone that he “wouldn’t tell that joke today” because the “times weren’t as sensitive as they are now.”

Are You Ready With A Tub Of Pop Corn To Binge Watch These Christmas Movies On Netflix?

All You Need To Know About Golden Globe Awards 2019