No, Seriously! More Than A Biopic, Manjhi Is A Romantic Saga

First and foremost, let me make it very clear to all the readers, the movie Manjhi – The Mountain Man, starring the critically acclaimed Nawazuddin Siddiqui and Radhika Apte, is more than just a biopic. It might not appear so, but the movie is in fact a beautiful love story, that showcases one man's immense… and I really mean ‘immense' and undying love for his wife. So much so, that he breaks down an entire mountain that brought death to the love of his life. Here are some moments from the film that slowly unfold this romantic story.

A young Manjhi is definitely smitten the very first time he spots Phaguniya after several years. He's got no clue that she's the same girl who he got married to years ago. In order to introduce himself to her without making it too obvious, he starts talking albeit loudly to one of his co-passengers atop the bus. When he gets off the bus, he gestures to her in an attempt to woo her.

Manjhi's father takes him to his young bride's house to get her home. However, once there, the girl's father starts to act pricy. To this, Manjhi retaliates saying he doesn't want to marry his daughter. But, when he realizes the old man's daughter is in fact Phaguniya, he decides then and there that this girl is no one but his.

When Phaguniya's father tries to get her married to a guy who is financially better off than Manjhi, the young lover rushes to her house, and runs away with his love in front of the whole village.

When A Man Eve-teases His Wife 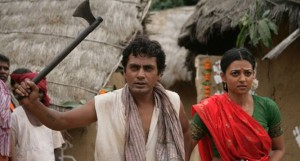 When Phaguniya, now Manjhi's wife, is eve-teased by a man, Manjhi loses his cool. At that point, he doesn't care that the man is from an upper class or that he is physically much stronger than him, all he knows and cares about is that no one can touch his love and just walk away unscathed.

The Gift Of Love

To pacify his annoyed lady love and to make her happy, Manjhi gets her a brand new pillow as a present so that she can sleep peacefully. Seems weird, right? But what you need to know is that he wasn't a man of means and even buying a pillow was luxury of sorts for him.

One Love For Life

After the demise of Phaguniya, Manjhi's dad coaxes him to remarry; if not for himself, then at least for the sake of his children. However, our Romeo flatly refuses saying that Phaguniya was the only woman ever meant for him.

Also read: Why Deepika Padukone Is The Perfect Role Model

When He Wants To Give Up

After spending considerable years of working on the mountain, our hero is tired and disheartened (can't reveal why). He feels he cannot defeat the mountain on his own. However, just as he is about to give up, he hallucinates a vision of wife encouraging him to conquer the mountain, and threatening to never speak to him again if he gives up. And, that's all it took for him to get to work again!

The Secret Of His Strength 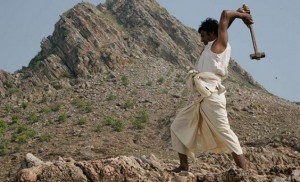 Through the years of his toil, he has a reporter friend by his side. One day, in the course of the long and hard 22 years of struggle, his friend asks him how he manages to do what he is doing. How he manages to break the mountain little by little every day? What gives him the strength? To which Manjhi replies "Love, love gives me the strength."

So now if you were planning to skip on the moving thinking biopics aren't your cup of tea, we urge you to think again. For Manjhi – The Mountain Man is a story all about true love, the forever kind!

It's All About The Dots – Super Easy Nail Art Tutorial

We Tell You What Is Better – Waxing Or Epilating