Ariana Grande’s leaning on her upcoming album to get her through this rough patch. Sweetener just dropped on Aug. 17, and the 'Breathin' singer is already working on her fifth studio album, which is speculated to be released before the year ends!

Ariana Grande took a break from working on her upcoming album for an honest Q&A with Twitter fans and we got a lot of inside of her life, Pete Davidson and MUSIC. Also, there’s a reason she’s so eager to get back to work.

“You literally made an album in 2/3 months…… this is insane. hardwork QUEEN!” one fan tweeted. To that, Ari replied on Oct. 24, “How u think i survived these 2/3 months ksjsksjs ……… damn.” Within those '2/3 months', Ariana went from being engaged to Pete Davidson, to becoming a single woman in October after the tragic Sept. 7 death of her ex-boyfriend of two years, Mac Miller. But now, Ariana promised another fan that she’s “better dis week”, here’s how her upcoming album helped her “heal.” 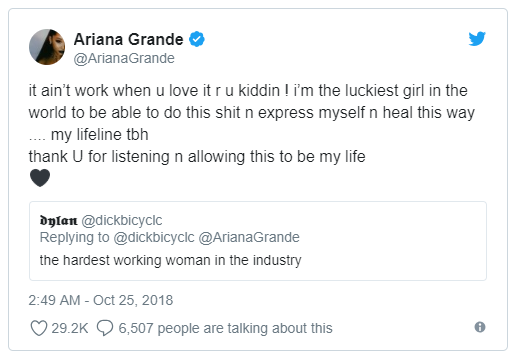 After correcting a fan who called her the “hardest working woman in the industry,” Ariana revealed how therapeutic her new music is. “It ain’t work when u love it r u kiddin ! i’m the luckiest girl in the world to be able to do this sh*t n express myself n heal this way…my lifeline tbh,” she replied. Another Arianator praised her idol’s 'passion for music,' and Ariana replied, “It fixes everythin[g].” Ari also finds emotional support in Piggy Smallz, as she tweeted that her pig is “the absolute love of my life.”

“I’m ready. my heart needs it actually,” she tweeted the day before. “Finalizing a few more things but i’m tryna get em dates to u asap.” Fans are even speculating that Ariana will combine Sweetener and her fifth album into one tour after fan account @thegranderoom made that suggestion. 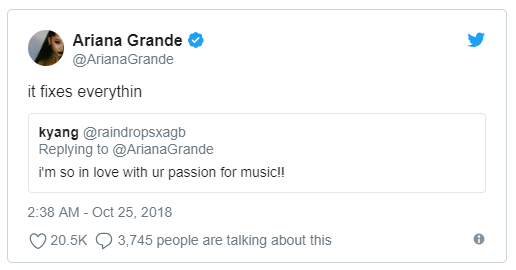 “Ariana has been really struggling emotionally since her split with Pete, she tries her best to be strong but this is undoubtedly one of the toughest times in her life because she’s not only having to cope with the end of a very intense love affair she’s also dealing with all her emotions over Mac’s death,” a source close to the singer revealed.

Well, we’re just happy that Ariana is doing great and we can’t wait for her to drop her album soon!