Recipe For Spicy And Cheesy Modak!

It's Ganesh Chaturthi time and the best thing about this Hindu festival is the amazing mouth watering delicacies that my Hindu friends would offer whenever I went over for a puja to their house. One of my favourites was the spicy and cheesy modak. Everyone likes modak, a sweet dumpling that melts in your mouth and lets you decipher the riot of flavours bursting on your taste buds. But when I went for the regular puja to my best friends' house last time, there was something different about modaks. They were even better. Not only were they crunchier, but there was also this surprise element when I bit into one – they were spicy! I gobbled up 6 of the dumplings one after the other and kept repeating, "It's really yummy, aunty!" and "Please share the recipe with me, aunty"; and guess what, last week, my friend's mom remembered that I wanted the recipe so she mailed it to me! So here I am, being the angel and sharing the fabulous spicy modak recipe with my lovely readers. Enjoy...

Spicy steamed modak: There are two different stuffings in this recipe; you can choose one as per your taste buds or make a lot of each, they are equally tasty. God bless the soul of the person who invented this recipe! 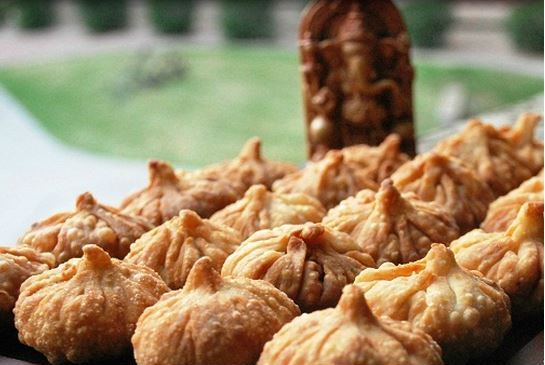 Fried modaks that melt in your mouth (Img source - swethainthekitchen.com)[/caption]

2 or 3 tbsp of green chutney

A pinch of turmeric powder

Half a cup boiled corn

Pepper as per taste

A pinch of cumin seeds/jeera 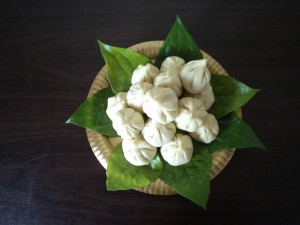 For the stuffing: To prepare the first filling, heat oil in a pan and add the sprouted beans and green chutney and cook on medium flame until the sprouts are well cooked. Now add the turmeric powder, salt, lemon juice and jaggery and mix well. Mash the mixture once cooled. For the second stuffing, add all ingredients to a big bowl and mix well.

For the dough: Heat the oil in a saucepan and add salt, mint leaves, and cumin seeds. Once the seeds start crackling, add a cup of water and let it boil. Once it comes to a boil, immediately add the rice flour and mix well. Cook for 5-10 minutes until the dough is ready and looks glossy. Remove from flame, let it cool down a bit and divide it into equal proportions.

Next step is the moulding, if you don't have a modak mould, you can make the dumpling with your hands. If using a mould, take a small portion of the dough and flatten it, then press it in the mould. If making it by hand, flatten the dough on your palm to make a circle as large as your palm is. Grease the modak and place a little bit of the stuffing of your choice on it, close the modak mould and seal it with more dough if required. If making by hand, bring the sides of the modak up and give a desired shape. Seal with extra dough and water. Make 10-12 modaks by repeating the same steps.

Once your dumplings are ready, it's time to cook them! You can either steam them in an idli steamer or deep fry them in a kadhai. Serve hot!

Quick tip: To make green chutney, grind together one cup of coriander leaves, 4-5 green chillies, a small piece of ginger and one tablespoon of sugar, with some water.

What To Keep In Mind Before Baring Your Midriff