Signs That He Is Never Going To Commit 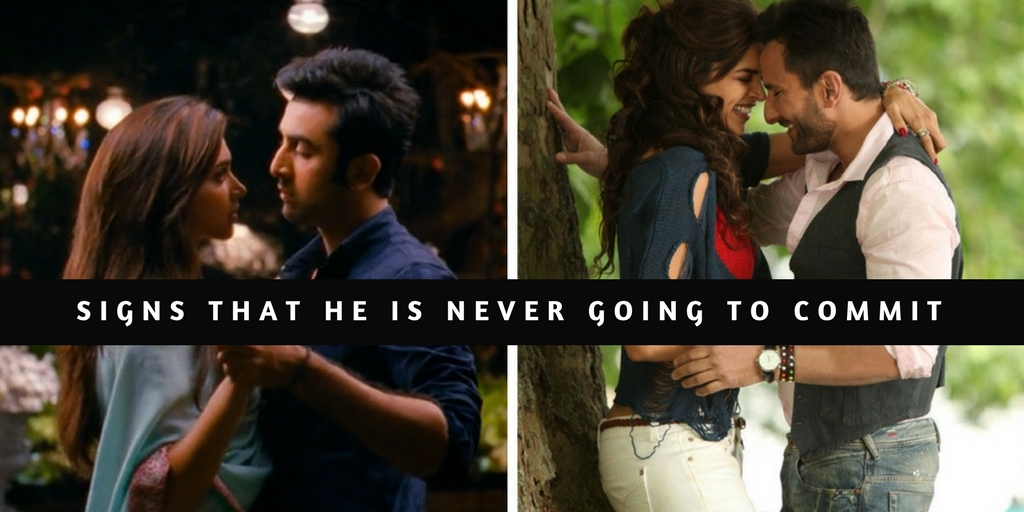 You may be going out for a year now, but you find yourself asking questions like "Where are we?". Commitment does not mean popping the question. Commitment means that he's mentally and invested in you, that he considers you a very important part of his life, that it's not a ‘You' and ‘I' anymore, it's a ‘WE'. It doesn't have to be grand gestures like giving us the key to your apartment or opening an account together, it is visible in the small things like him choosing places that are closer to your house and restaurants that serve your favorite cuisine. It's him going out of his way because he wants you to know he wants you to be in his life with him.
Do you often find yourself wondering the status of your relationship, do you have doubts about how committed he is? If he does the following things, he's not in this for the long run!

1. He never talks about the future

He never talks about introducing you to his family or meeting yours. Does he always change the topic when you talk about your future with him? This is a major sign that he is not sure about having you around in the future.

2. You feel like there's a lot you don't know a lot about him.

You guys have been going out for a long time and you know that he's not expressive, so he does not talk much. But when it becomes a habit, its not good. Are there times when he refrains from giving his opinion about something? Do you still feel like he has his guard up most of the times? He's never taken you to one of his basketball games, or to his chess group, or to the Sunday brunch meet-up group he's a part of. There are a lot of regular activities he does that you're never included in.

3. Everything in your relationship is based on his convenience

Be it when you guys talk over the phone or who keeps the phone, where to meet and when to meet. Does he have more authority in the relationship? Is he calling all the shots? This could also mean that you like him more than you should and need to take a MAJOR step back cause girl, this cannot go on! There needs to be a balance when it comes to these things.

4. He never involves you while making any decision

He tells you he's going to travel around the world for two months, or that he's quit his job, or that he is moving apartments next week. He doesn't ask for your input.

5. Disappears for days and acts casual about it

He disappears for 2-3 days or a week with his phone switched off or him not answering your calls and messages. And when he does call you back, he pretends like nothing happened and starts with "Wassup? How have you been?". It's his way of letting you know that you aren't a deciding factor in where he goes and what he does. This is a major eye opener cause he doesn't consider you important enough to touch base with you or keep you posted. If a guy cares for you, he will make room for you in his life, irrespective of how busy he is.

6. He tells you he doesn't want to get attached

7. He has never had a long or serious relationship

As nice as that sounds cause that means you don't have to deal with any emotional baggage, this could also mean that he has commitment issues and backs off before things get serious!

8. He doesn't take you out on real dates

As much as we love cuddling and the whole concept of ‘Netflix and chill', is it happening more than the actual dates? Are you guys meeting at home more than you guys go out? If he's not taking efforts to take you out or impress you or plan something special for you, he's never going to! If he barely puts in efforts when it comes to dates it means he doesn't feel like you're worth the effort.

9. He lets you go to bed angry

So ladies, if he does more than any of the above, maybe you should talk to him about it. Because you don't want to invest time in a relationship that has no future, do you?

10 Bollywood Characters That Had Commitment Issues