Tips to stop a guy from flirting with you

Have you ever been worried about how to stop a guy you may not like from flirting with you? Is he still hanging around after you have made your intentions clear? It could be a good friend or maybe just another guy who stands and stares at you. It's never pleasant when you are not interested and it can be a big pain in the backside when you cannot get rid of it. If you know the guy and he may be a good friend here are a few tips to let him know that he needs to back off:

If the guy is flirty and you don't like him talking that way, tell him on his face that you don't like it instead of ignoring what he says. He may continue to say such things if you do not build the courage to tell him you do not like it.

Tell him you are already taken

Try telling him that you already have a boyfriend. You can even talk to him about a crush you have so that he gets the point and moves away.

Remind him he's just a friend 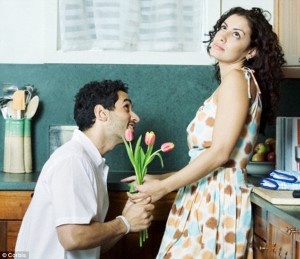 Every time he makes a move on you, remind him that friends do not behave this way. Tell him that he's a good friend and you aren't looking for anything beyond that.

If he still doesn't get the point, then your last resort should be to completely cut him off from your life. Though this may hurt him more than you, it is better now than never. Consider the feelings he would develop if this were to continue and weigh out the situation critically. That's the best way to go!

Want to propose? Tips for a perfect proposal

Habits that ruin your health