The year 2019 was great for films in Bollywood. The year witnessed several commercially successful movies. 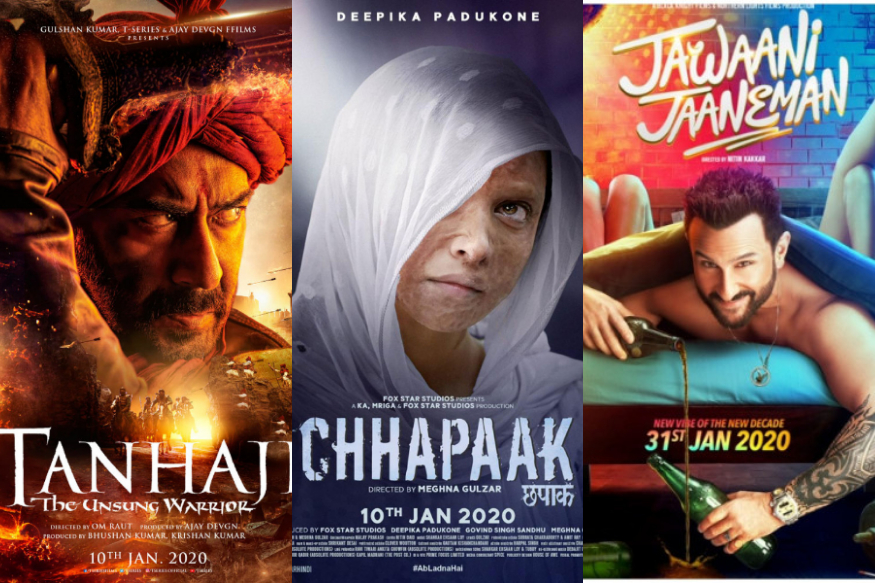 As per the current release dates, here are some Bollywood 2020 releases that will clash at the Box Office:

A week later, the star-studded Tanhaji: The Unsung Warrior, which is about the battle of Sinhagad in 1670 that was fought between Tanhaji Malusare and Udaybhan Singh Rathod, will release in 3D. It star Ajay Devgn, Saif Ali Khan, Kajol and others. The same day, we will see also see Vikrant Massey and Deepika Padukone starrer Chhapaak in cinemas. The film is based on the real-life story of acid attack survivor Laxmi Agarwal, hitting the screens.

Dancing its way to theatres on January 24, will be director Remo D’Souza’s Street Dancer 3D with actor Varun Dhawan, Shraddha Kapoor, and Nora Fatehi. Filmmaker Ashwiny Iyer Tiwari’s Panga in which Kangana Ranaut plays a kabaddi player is also set to release on the same date.

The following week will have Saif Ali Khan-Tabu-starrer Jawaani Jaaneman releasing on January 31. The rom-com will mark the debut of Alaia F., daughter of Pooja Bedi, in an important role. The film is directed by Nitin Kakkar of Filmistaan fame. Himesh Reshammiya’s Happy Hardy And Heer is also set to release on the same day. The movie has been majorly in news due to its soundtrack that features the Internet singing sensation Ranu Mondal.

Vidhu Vinod Chopra’s directorial project Shikara – A love letter from Kashmir is set to be released on February 7. Audiences are excited for this one as he will be returning to the director’s chair. Filmmaker Mohit Suri’s Malang, starring Anil Kapoor, Disha Patani, Aditya Roy Kapoor and Kunal Kemmu, will also release on February 7.

Vicky will debut in the horror genre will Bhoot Part 1- The Haunted Ship on February 21. Actor Ayushmann Khurrana’s Shubh Mangal Zyada Saavdhan, which is the second installment of the hit film Shubh Mangal Saavdhan, is also scheduled to release on February 21. This film will reunite Badhaai Ho stars Neena Gupta and Gajraj Rao with Ayushmann.

Actress Janhvi Kapoor will be seen essaying the role of the Indian Air Force combat pilot Gunjan Saxena in The Kargil Girl, which is set to release on March 13. Rajkummar Rao-starrer Turram Khan, which has been renamed Chhalaang, will also release on March 13. This will be Rajkummar’s sixth collaboration with filmmaker Hansal Mehta. The duo has in the past worked together in Shahid, CityLights, Aligarh, and Omerta, besides the web series Bose: Dead/Alive.

April will begin big with Ranveer Singh playing legendary cricketer Kapil Dev in ’83. The Kabir Khan directorial is about India’s historic victory at the cricket World Cup of 1983. The actor will also share screen space with wife Deepika Padukone the film that is set for April 10 release. Lootcase will also hit the screens on April 10.

Hardik Mehta’s Roohi Afza is set to release on April 17 and stars Rajkummar Rao and Janhvi Kapoor as the lead actors. It will face tough competition from Gulabo Sitabo – a Shoojit Sircar directorial with Amitabh Bachchan and Ayushmann Khurrana fronting the cast.

Mukesh Chhabra’s Dil Bechara, starring Sushant Singh Rajput, will hit theatres on May 8. Ribhu Dasgupta’s Bollywood version of The Girl on the Train with Parineeti Chopra will also release on May 8. Actress Vidya Balan’s Shakuntala Devi based on the life of the late mathematics genius Shakuntala Devi will clash with the two films on the same date.

Akshay’s Laxmmi Bomb, a remake of the super-hit Tamil horror-comedy Muni 2: Kanchana, will hit the theatres on May 22. It’s also the day when Salman Khan’s Radhe, helmed by Prabhudheva, will release.

Indoo Ki Jawani and Nikamma are set to release on June 5.

October 2 will be flooded with new movies. This Gandhi Jayanti has been booked for Sardar Udham Singh by Shoojit Sircar, Satyameva Jayate 2 by Milap Milan Zaveri and Toofan by Rakeysh Omprakash Mehra.

The same goes for November 13. Prithviraj, which will launch former Miss World Manushi Chhillar as an actress alongside Akshay Kumar. This film will release along with Rannbhoomi and Dhaakad where Kangana Ranaut will be showing off her action moves in the film.

Christmas time, which has proved lucky for Aamir Khan, will have the superstar’s Laal Singh Chaddha, a remake of the Hollywood film Forrest Gump starring Tom Hanks, clashing with Akshay’s Bachchan Pandey.

For more updates from the world of entertainment stay tuned to UrbanAsian.