When And How To Introduce Your Daughter To Her First Bra

As a child, your little daughter might have tried to stuff her top with handkerchiefs or small pieces of cloth to make it look like breasts. How cute was that! But when girls in their adolescence actually start developing breasts, they sometimes hate wearing a real bra. But more often than not, girls these days reach puberty before their adolescence. In such a situation, it could get difficult to gauge when and how to get your daughter to start wearing a bra. But mothers need not worry about it anymore, here are some tips that would put a lid on the confusion and help you introduce your daughter to her first bra.

Also read: Tips to deal with your teens 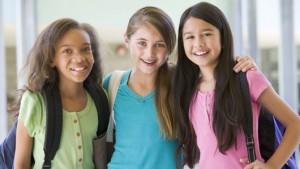 These days, girls as young as 9 or 10 are reaching early puberty[/caption]

You need to realize that due to changes in diet, hormones, and lifestyle patterns, bodily development has started occurring at a fast rate. So it isn't necessary that your daughter would develop breasts only after reaching adolescence (or teenage). The development of breasts is not related to adolescence but to puberty; so a girl may start developing breasts earlier, sometimes between the ages 10 and 15.

Also read: Explaining the birds and bees to kids

Once you start noticing the physical changes in your daughter, it's time to start preparing her for the big transition that she is about to undergo. If you see that your daughter is growing at a fast rate, then just be on the safe side and explain to her in the most gentle manner the changes that her body will soon undergo. Talk to her about bodily transformation, inner feelings of sexual nature and also explain menstruation to her. Don't make it sound painful or scary as this is an extremely important step; something she would remember forever. Support her, let her ask questions and answer them in the best possible way.

Also read: Why you should get a bra-sizing done 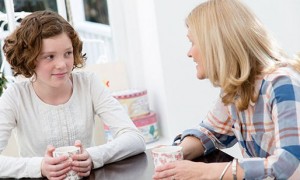 If you think she is ready for it, then it's time to get her the ‘first bra'. Your daughter is definitely going to be excited about it but you must put comfort first. Tell her that the reason you must start wearing a bra is comfort and not vanity. Explain to her that if she does not wear a proper bra even though she has started developing the breast tissue, she may feel uncomfortable while moving about. Her breasts may feel tender, sensitive and there are chances they may hurt while running or playing. 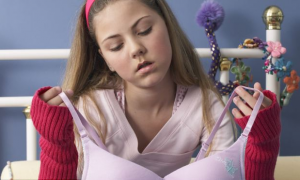 If she's skeptical about wearing a normal bra, try a beginner's bra first[/caption]

Don't simply buy her a normal bra at first. Wearing a bra is something she isn't used to, so it's better to get her a ‘beginner's bra' (also called trainer's bra and sports bra).  A beginner's bra is made of very soft fabric that covers the elastic as well and is thinly padded for added comfort. Also if she feels uneasy at first, don't let her wear the bra at all times. Ask her to wear it before going out and she can remove it while she is at home. Once she starts getting used to it, she can wear it all the time. Another important tip is never let your daughter wear a bra at night. The importance of this cannot be stressed enough! Wearing a bra while sleeping can increase chances of breast cancer in the long run – but don't tell that to your daughter!

Lastly, make sure to get the right fitting bra for your daughter. A well-fitting bra is one that completely supports and covers the breast and has no ‘spillage'. If there seems to be spillage, increase the cup size; and if you find space left in the cup, reduce the size. Also, it's important to let her know that this is all normal and completely natural and she doesn't have to feel self-conscious or ashamed of her changing body.

Importance Of Oiling And Massaging Your Hair