26th June is observed all over the world as World Anti-Drug Day. This day, as evident enough, is used to create awareness about the ill effects of drug usage. The main objective of celebrating this day is to educate the masses to say ‘no' to drugs. Publicity campaigns in the mass media help to create mass awareness about the ill effects of drug abuse and if we can join hands together, we can make sure that every child, teen and adult knows about the repercussions of drug abuse and the effects it has on mental and physical stability.

The United Nations Organisation on Drugs and Crime has been actively involved in launching programs to mobilize support for drug provision. They launch campaigns on television and news websites and urge people to be actively involved in them. This also involves public rallies and mass media involvement in coverage of these rallies.

(Also read - Heartbreak? Here's how you can deal with it)

An annual overview of the major developments in drug markets will be presented on World Anti-Drugs Day. So if you are interested in knowing how the world is faring when it comes to reduction efforts in drug abuse, the World Drug Report will let you know the same.

What happens around you? 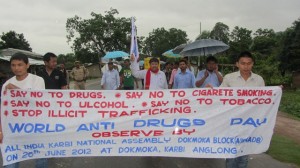 Last year, a number of states in India held awareness-raising programmes for people of various age groups, focusing on topics such as drug use among women and children and the harmful effects of drugs.

What can you do?

You can do the little you can to ensure that your friends who could be susceptible to drug abuse can be well educated about its ill effects and life threatening capabilities. Many under-privileged people indulge in drug abuse and you can enrol them in rehabilitation centres if you have the contacts. Visit rehabilitation centres and be there for victims who feel lonely and deserted. Be family for those who are suffering from loneliness and resort to drugs to fill the void. Take part in any campaign that goes on around you.

(Also read - How to be money-wise while staying alone)

If you aren't sure about the events happening in your immediate neighbourhood, take efforts to find out!

Transitioning from conservative to chic